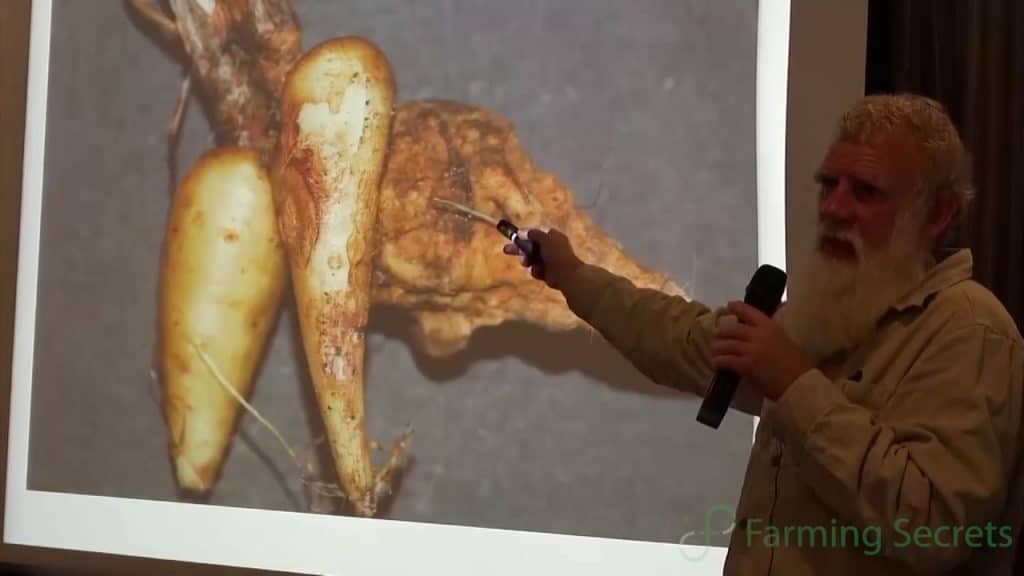 The most amazing photo in Australia today, my brother, Jonathan Jones, who’s supposed to be an artist, he’s a very good artist, but he turned himself into an archaeologist after reading Dark Emu so that’s my grand final. I never played in the one in Gus did at Junior high. They wouldn’t let me, wasn’t good enough, but this is a very important photograph and you can see it’s got a half mark here and it criss-crosses. Kangaroo sinew was used to tie a vertical handle onto that stone. It is so heavy. It’s this long and so heavy you can’t use it above your waist for any length of time. So, this stone was used between your legs.

Now, when Jonathan went to the museum, he asked to go down into the basement and they had crates and crates and crates of these stones that at that stage were unlabelled. These are bogan-picks. These were used to turn the soil. Lieutenant Grey in Western Australia saw turned soil. Sir Thomas Mitchell saw similar fields in New South Wales and Queensland, and tools like that were used. They’re unlabelled in most Australian museums today. Jonathan Jones, out of the brilliance of his own mind, who’s gone and said, “I’m gonna have a look at them,” and he turns this up. I love him.

The middle one has the tooth marks on it of a bush rat, Australian bush rat, and I have real trouble with them in my garden home at Gypsy Point because these animals will walk past strawberries to eat those. That’s how good they are. They’re a beautiful thing to cook with and what we’re noticing about them now is that after five years of growing them, the basal leaves of both scapigera and lanceolata are starting to block out weeds. They’re crossing paths with each other and they’re blocking out the weeds, but, also, they respond to being tilled. They love you weeding in amongst them. They love you lifting them and taking that tuber because they’ve been domesticated for this.

This is a domesticated plant. It loves human interference because it’s been getting it for 80,000 years. Well, I don’t know that, 80,000 years. What I do know is that in this year, a midden was eventually examined in Western Victoria, which it was so old, it had become ossified

Soil Health Advocate & Business Partner @ Farming Secrets ‘Regen Ray’ is a soil lover and partnered with Farming Secrets to take their business into the next generation of online learning, launching the Soil Learning Center during the pandemic. He now works with mentors from around the world to create educational programs all about soil. ‘Regen Ray’ has been teaching people about soils for years through his online classrooms, webinars and recently launched his podcast, Secrets of the Soil. On this show, he interviews experts in their field and talks about important topics all about the soil. ‘Regen Ray’ wears many hats from business to marketing to operations and even crypto. His belief that everything good in life starts with healthy soil has allowed him to dig deeper and help create inspiring conversations all over the world.
SEE ALL POSTS
PrevPrevious PostGrowing Yam Daisies – Australia’s Earliest Agriculture?
Next PostIs This The Oldest Human Construction on Earth?Next