After training with Elaine, Tony Evans started off with a worm composting facility which quickly expanded into supplying compost and on-farm making of thermal compost. His company now works mainly with dairy farmers getting rid of effluent and advising on reducing their reliance on chemicals, particularly urea. When Elaine visited Tony there were only a handful of farmers willing to give this ‘new’ method a go. Tony took Elaine to 4 of the dairy farms who were following a practice of making compost and reducing urea. Andrew Whiting is one of the dairy farmers who pioneered using compost. He is here with Elaine and tells her of the benefits of change.

There are literally 1000’s of Elaine’s students just like Tony, Reggie, Andrew, Darren and Rob who now have the confidence to farm biologically with the knowledge to apply and solve their problems. There is a joy in seeing a healthy soil reappear and to be able to farm profitably and simply with health. Watch some of our participants here:

Here’s Andrew Whiting and Reggie Davis with other farmers and their families at the launch of the “Green Pastures Movement” Dairy Company in the centre of Melbourne last year. These farmers are all part of the pioneering group of dairy farmers who worked alongside Camperdown Compost. Through their research, commitment and working with like-minded farmers, the results have been dramatic. The farms have:

They were looking for better, healthier options for solving their farming problems of which a major one was getting rid of their effluent. They felt that chemical based methods were not working for their animals, plants, soil or their own health. It has taken a huge amount of courage for them to make the move to sustainable farming, shifting from the known to the unknown, from practices that had been ingrained over decades to test a new method hoping for better results on farm and better quality produce. 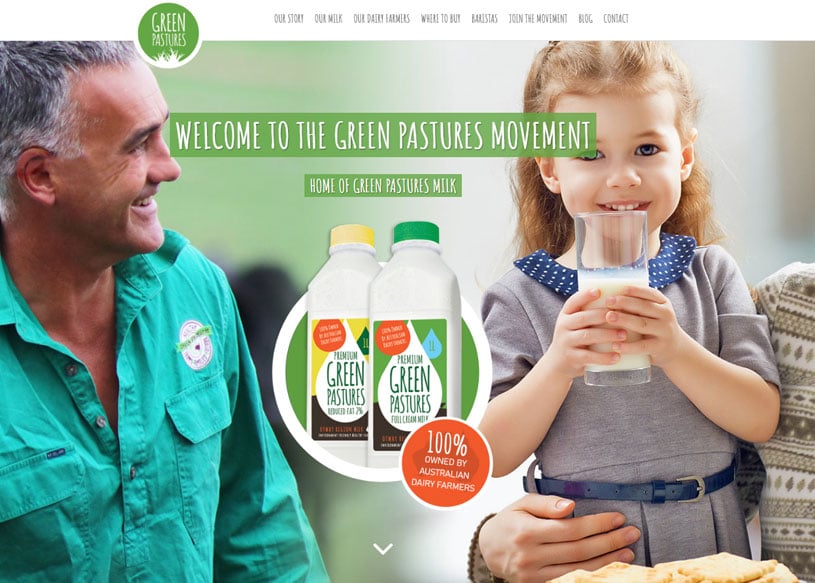 Rob Sutherland is instrumental in taking an organic approach at de Bortoli’s, a boutique vineyard in the Yarra Valley, Victoria. Starting with making his own compost using a lot of the grape marc, he has extended to making compost teas, incorporated a biodiversity of companion plants around the perimeter of the vineyard as well as legumes and cereal crops in the interrows. He is loving the challenge to grow the best grapes with the least amount of chemicals.

Hi Elaine and co, fantastic course, I am already seeing good results in the soil from my compost tea application… I can’t believe how straight forward and easy it is to get my head around this stuff, it’s like removing dark curtains of misinformation and seeing a bright sunny day
DamianVIC, Australia
I now have a whole new understanding and have had 10′s of aha moments where things have gone wrong and Elaine has explained exactly why. Poor old mother nature still let me get some good results even though I messed up, and have never ever used and pesticides, fungicides, or artificial fertilizers. I’m so grateful for this course and thank you all from the bottom of my heart.
ColinMalta
I'm very glad that I was able to find the course and that I was able to join... I feel that I learned more about learning by watching Elaine teach this course than I did in my entire 4yr university study. The way she offered more questions as an answer to a question really taught me a lot about how I need to ask my own questions. The way she interacted with the students was very encouraging and not like anything else I have seen in all my traditional schooling. The way she treated repeat or remedial questions over and over was particularly special, and to never get frustrated or short with her answer despite how off topic the question was, is especially encouraging. You all are a special group of rebels that are helping people empower themselves on a journey that is much bigger than any one of us.
ScottRiverside, CA, US
This has been a very empowering course. For me, learning that there is actually some very positive action that I can take to reverse the degradation of our soils, visible even in my own small organic backyard, has been quite frankly, a huge relief and gives me great hope for the future. It was all very daunting before. It’s also wonderful to realize so many other people are also trying to turn things around. That someone like you, Dr Elaine, has made the effort to reach those of us out here who can’t attend a course in person, well, the fact that I paid for the privilege of listening to you online, doesn’t diminish my appreciation. That includes Helen and ‘Support Team’. So thanks to all of you, and I consider you have made this online course a huge success!
Ginny KlekarPermaculture, North QLD, Australia
Really enjoying the course and certainly getting a lot from it. Thank you.
Rob McCallumPasture, Auckland, New Zealand
Elaine, Thanks so much for the amazing lectures and your long thoughtful answers to a barage of questions so far. I’ve learnt so much. Loving being able to replay over and over 'til I get it. Really impressive results and its hard to be skeptical with photographic evidence in front of you. I’m keen to proceed with the full course and to recommend to farming friends
Bee WinfieldFarmer/Permaculture, WA, Australia
I have found the Soil Food Web Course to be an extremely valuable resource. I’ve been able to access some experts in the field and they have been very accessible and the feedback has been very direct and pinpoints to the questions I’ve asked that it’s an ideal opportunity to learn from the environment is huge. So I would encourage anybody if they’ve got access to the internet to have a look at the Soil Food Web Course, I can’t encourage them enough… It’s not that it’s difficult to understand and it’s not overly time consuming either. It’s not something you have to dedicate hours a day to. But you will find that once you get a little bit of an understanding, more things will fall into place and the jigsaw puzzle picture will come into focus really quickly and the Soil Food Web Course is one of those fabulous resources that are available there.
Lyn KelsonGrazing, Drummond, Victoria, Australia
Thank you for this eye and mind opening knowledge I got from this course. Now I can apply this knowledge in my farm.
Dr RiadKuwait
Previous
Next