Steve Davie Shows Us into the Egg Sorting Room 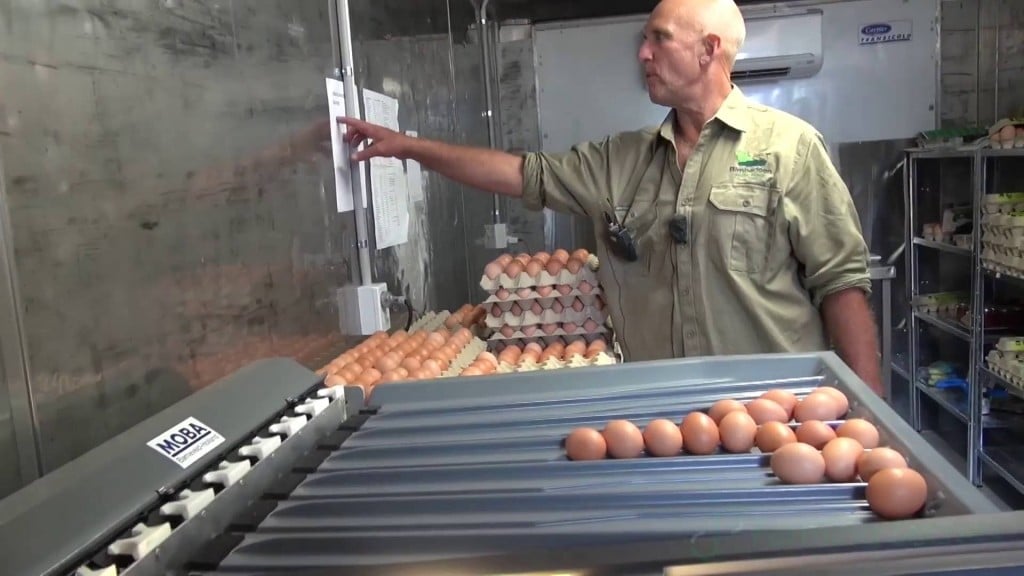 This is the candling machine. You put the egg over the top, look for any cracks in them, and away they go. What they do then is this weighs them, so you’re number one to number seven. That’s a number two, so that’s a 65 to 70 gram egg. Number three, 60 to 65, all the way down. So when you first start, they’re all sixes and sevens, and slowly over the last couple of months they’ve grown.

We get mostly threes at the moment, which is a 720 to 780 gram egg. So, then we do them in trays of ones, twos, threes, fours, fives. There’s a restaurant over there so you sell them in boxes of 15 dozen. So they get it in trays of six, six by two and a half – that’s their 15 dozen. Others here are for delivery tomorrow. So it’s a matter then of just working out who your customer is the next day and packing that way.

Woman: Do you still use the air-conditioner in here to keep it at below 18 degrees?

Man: And when – you don’t have to stamp?

Steve: No, we have to stamp them. So then you can see that green stamp on there.

Steve: That’s an individual process, but you get very quick at it and do the whole stack. I don’t know the purpose of it ‘cause if you crack an egg –

Woman: So it’s sorted into sizes?

Woman: And what’s this tag say on it?

Steve: It’s our property identification code, which is BCD4, I think.

[10:00] Steve: Weight into a size so same, same. Number one is greater than 70 gram. But I was just saying that when we first started they were all sixes and sevens, so all pullet size. They’ve all moved up there, we don’t get any sixes or sevens anymore. We probably get about 18 out of 450 are fives, so we’ve got very few 600 gram eggs, all the rest are 700 plus.

This is a clip from “Walk the Talk” with Steve Davie: Resilience Through Diversity filming available for Farming Secrets Members.

Soil Health Advocate & Business Partner @ Farming Secrets ‘Regen Ray’ is a soil lover and partnered with Farming Secrets to take their business into the next generation of online learning, launching the Soil Learning Center during the pandemic. He now works with mentors from around the world to create educational programs all about soil. ‘Regen Ray’ has been teaching people about soils for years through his online classrooms, webinars and recently launched his podcast, Secrets of the Soil. On this show, he interviews experts in their field and talks about important topics all about the soil. ‘Regen Ray’ wears many hats from business to marketing to operations and even crypto. His belief that everything good in life starts with healthy soil has allowed him to dig deeper and help create inspiring conversations all over the world.
SEE ALL POSTS
PrevPrevious PostA Look at How Bimbadeen Farm Tours Became Popular
Next PostSteve Groff, Cover Cropper, Asks You 3 QuestionsNext

Defining sustainability in animal agriculture can be tricky. Before the industrialization of farming, raising livestock was a part of most farms around the world. Many