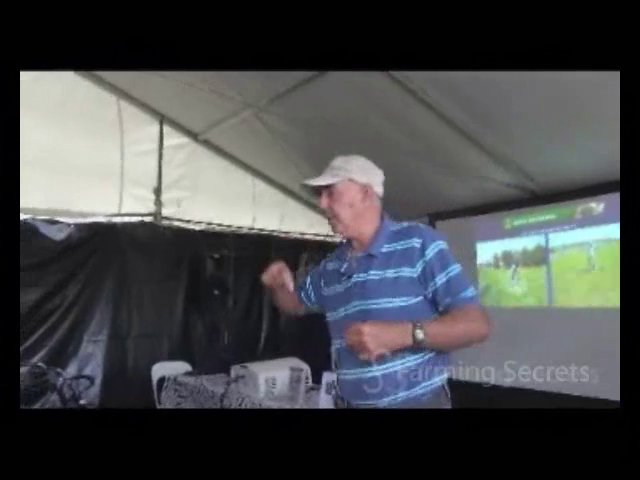 This talk “Say goodbye to fertiliser costs – worms are the answer!” was filmed at S.A.F.E (Seymour Alternative Field Days) March 2014. Davo Davidson has been experimenting with his compost worms out in the paddock. Now he wants you to help prove his theory: “Davo’s Worm Farms” introduce their latest trials “Field Innoculation” If you want to join the trial he will also supply the worms for you! Contact details below.

Details of the trial with compost worms
Until recently, it was generally accepted that Compost Worms would not survive in the paddock, and needed to be raised in specially prepared beds or windrows stocked with sufficient decaying organic matter to prevent them from wandering off in search of food.

However, the paddock trials we have conducted at our property at Broomfield in Central Victoria have shown that there is a way to Fertilise your paddocks using Compost Worms.

In the past, it had been our normal practice, that once the cows had been removed from the Paddock, we would drag the paddock with a set of old tyres or harrows, to break up the cow pats and to spread the dung evenly over the paddock.

Unfortunately, this practice not only led to much of value within the cow manure being lost through either leaching or oxidisation, it also destroyed the possibility of the compost worm making the cow pat its home and surviving in the paddock.

What we did, was to leave the cow pats in tact, and then to inoculate them (one every ten metres or so) with specially prepared Vermicompost containing live Compost Worms and unhatched worm eggs.  We applied the vermicompost by driving up and down the paddock with a potato box of vermicompost on the back of the ute, and my assistant dropping a handful on top of a cow pat as I stopped by it. We worked the paddock in strips approx. ten metres wide.

This was done in the Autumn, after the break when the soil had been sufficiently moistened.  The worms were able to survive in the manure, the worm eggs hatched, giving significantly more compost worms per pat, and then they rapidly converted the cow manure in to Worm Castings, a rich source of carbon. Once their job was done, they simply moved to next available cow pat under the cover of darkness.

What then happened was that the native earthworms, ever present, but often hibernating deeper in the soil awaiting suitable conditions in the top soil, re-appeared and commenced consuming the worm castings (rich in healthy microbes. i.e. Bacteria and fungi.) and began a process of taking that organic matter down with them in to their tunnels and effectively spreading it over a much larger area.  We estimate that the original cow pat with a diameter of 20cm would produce an area fertilised of approx. 2 metres in diameter.

So, with ongoing good rotational grazing practices, the worms can continually be making available the nutrients required for healthy pasture growth.

Soil Health Advocate & Business Partner @ Farming Secrets ‘Regen Ray’ is a soil lover and partnered with Farming Secrets to take their business into the next generation of online learning, launching the Soil Learning Center during the pandemic. He now works with mentors from around the world to create educational programs all about soil. ‘Regen Ray’ has been teaching people about soils for years through his online classrooms, webinars and recently launched his podcast, Secrets of the Soil. On this show, he interviews experts in their field and talks about important topics all about the soil. ‘Regen Ray’ wears many hats from business to marketing to operations and even crypto. His belief that everything good in life starts with healthy soil has allowed him to dig deeper and help create inspiring conversations all over the world.
SEE ALL POSTS
PrevPrevious PostCreating A Micro Climate
Next PostBenefits of recovering waste productsNext