Home » Biodiversity » Putting an insurance policy on the dam 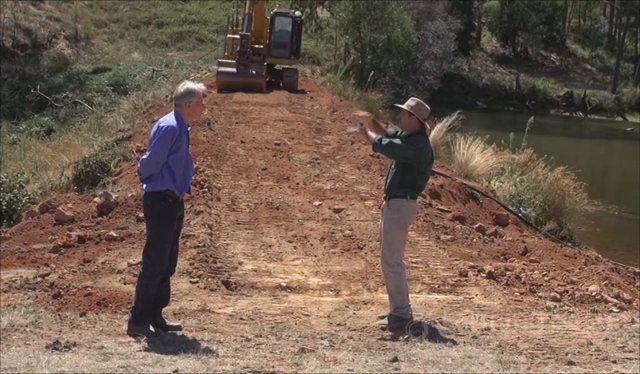 David: So what we’re doing is putting an insurance policy on the dam here.
We’ve got a spillway, another spillway on that side which doesn’t leave as much like, what they call free board. So we want about a meter from the high water mark to the top of the dam wall. So what we’re doing here is we’re raising it, raising the level up and putting a level line across. We’ve pulled the material out of here because we need more material. Then we’ll be actually excavating through this section. There are some pegs marked out going that way so they are on dead on contour. So when the water comes up, it will go out onto these peg marks, will go around the ridge and around the valley and keep going.

But what it will hit, when it hits about that tree and we want a nice, either the valley or a ridge point, to exit the water on these, what’s called the level sill spillway. So the water actually sheets over it as opposed to doing that which classically most Australian dams are and then actually start cutting and incising. So if we can put it on a level sill so the water exits passively and because it’s dispersed, it dissipates all the energy which is really what we want to do with it and it can drop a lot of its silt load in the swale etc. So that’s really what we’re doing here. We only started this morning. We will put another pipe in there just for aesthetics so there’s a bit of water that comes down the little old water fall. But really as I say we’re putting in an insurance policy for the dam. Yeah.

Hugo: That’s worth it isn’t it when you got so much water to hold.

David: Well, it is. It is. If anything happened here, if the water goes over the wall starts eroding, once that starts happening, this whole dam could go, take the next dam and then also take the next dam.

David: So it’s really it is absolutely an insurance policy. And we’re taking that flash flooding events, the extremeness of the flash flooding events in a way by being able for the water to fill up. We still got that meter from where it spills over to the top of the wall and it will have probably about two or three megalitres that they can actually flow up this swale as well. So that just takes any big surge, any big rainfall events and pacifies it.

Hugo: And puts it into a safer area where it’s not going to do the damage.

David: Absolutely. Safer area and then we got other functions that we will plant trees on the swale mound. The trees are naturally going to get irrigated, like they could be productive trees, they could be fodder for the stock, fruit trees, nut trees, etc. and timber trees. Yeah.

David: Yeah, multiple functions. As well, as this terrace here, we’ve excavated the material out here, but we can also create quite a micro climate here because we are north facing. We’ve got the thermal mass of the water. We’ve got the reflective quality much like a mirror coming off the water as well. So here, you’d probably find we’d be about 5 degrees warmer in the winter.

This clip is a sneak peek of our “Walk the Talk” April 2014 filming from the Earthworks to Create a Fully Functional Farmland with David Spicer.
‘Walk the Talk’ filming is one of the benefits of becoming a Farming Secrets member – see more benefits here: https://farmingsecrets.com/join/

Soil Health Advocate & Business Partner @ Farming Secrets ‘Regen Ray’ is a soil lover and partnered with Farming Secrets to take their business into the next generation of online learning, launching the Soil Learning Center during the pandemic. He now works with mentors from around the world to create educational programs all about soil. ‘Regen Ray’ has been teaching people about soils for years through his online classrooms, webinars and recently launched his podcast, Secrets of the Soil. On this show, he interviews experts in their field and talks about important topics all about the soil. ‘Regen Ray’ wears many hats from business to marketing to operations and even crypto. His belief that everything good in life starts with healthy soil has allowed him to dig deeper and help create inspiring conversations all over the world.
SEE ALL POSTS
PrevPrevious PostGrassland Restoration Project
Next PostCreating A Micro ClimateNext