Learn the secrets of a true progressive thinker and be inspired to implement and integrate her valuable lessons into your farming. 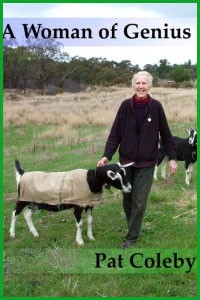 Pat Coleby was Australia’s foremost authority on natural farming and caring for animals without chemicals. Despite all the conceptions that utilizing the chemical method of farming is more cost effective than using the natural method, Pat Coleby shows us the honest truths about natural proven methods that really work, that are far more effective, sustainable and cheaper.

In the Film “A woman of genius“, Pat Coleby discusses the different vitamins and minerals for animals and especially stresses the importance of vitamin C, even for snake bite. She elaborates on the different mixtures that she has applied to eradicate numerous animal diseases. She also tells of her personal experiences using nutrition to combat cancer and respiratory problems. Pat traveled extensively throughout the country as a lecturer and farm management consultant as well as spending many hours on the phone advising clients around the world.

Throughout this Film, Pat Coleby will tell you the reasons as to why she decided to take the natural approach to farming and caring for her animals. She will explain to you what remedies she integrated which made an enormous difference to the production and to the health of her farm and stock.

This Film is Pat’s story, an autobiography as told by her of her life and now serves as a lasting insight into her personal viewpoints on many aspects of farming systems and the battles she won. It also is a guide to first start integrating natural methods into your daily farming practices. It is highly recommended for all farmers and all involved in animal husbandry.

Are you struggling right now to keep your animals healthy?

Are you finding it hard to keep up with the costs of feeding your stock?

Would you like to discover the simple and cost effective ways to keep your animals healthy while saving on feed?

You can get access right now to deal with your problems. Right now you can hear from many farmers who have adopted Pat Coleby’s system of providing free choice minerals for their animals. Initially Pat made up various mixes of minerals for both preventing and eradicating animal sickness and disease but in the latter years advocated that minerals be provided separately so that the animals could self-medicate. She also knew that certain minerals such as copper should never be offered without dolomite

As farmers started offering a range of minerals they found a surprising range of benefits occurred including: Weight gain, less worms, no lice, better birthing rates, stronger wool and of great value all animals were reported as being more satisfied with eating less feed.

Lack of green feed… heifers have remained fit and healthy.

My husband and I run an Angus Stud and commercial herd near Braidwood (NSW). We’ve been in drought conditions for some time now and have had no green feed since the beginning of the year. However, as I write this story we are having lovely soft rain (over 35ml so far this week). Prior to this we had just enough to green up the paddocks but had no real growth. We have grazed our cattle on the roadside a few times this year and it was during one to these times that I read a book by Pat Coleby titled Healthy Cattle Naturally. As we were already working along similar lines and were feeding molasses as an energy supplement (without urea), we decided to try some seaweed and other vitamins. We found Vitec’s phone number in her book and initially purchased some Vitec Min-Kel and then later, on their recommendation, some Omega Fish Oil. This spring we calved seventy heifers. We always supplement them with cereal hay (they prefer wheaten) and add unpasturised apple cider vinegar to their drinking troughs. However, this year in addition we fed a mix of roughly 20 litres molasses to 60 litres water in roller (lick) drums. To this we added 1 litre apple cider vinegar, 1 litre Vitec Min-Kel and 1 litre Vitec Omega 3 Fish Oil. To do this we remove the roller, add all the ingredients, stir with a paling until mixed, then replace the roller. We take care not to expose the Min-Kel and Fish Oil to light to preserve the minerals. Because the cattle get so excited and don’t all leave the roller until it is empty, we usually leave a day or two between refills after they empty it. Despite the lack of green feed and virtually no roughage, our heifers have remained fit and healthy, have calved quickly (with less stress to the calf) and have had lots of milk for their calves. We only wish we had the time, energy and money to feed all our cattle this mixture. For any cattle that are not doing well, we “kick-start” them with a drench of both Min-Kel and Fish Oil, together with a shot of VAM if they are really poor.

Received the Film yesterday and thoroughly enjoyed it. The quality is fantastic and the content is perfect. Only one complaint and that is “I would like more.” I find all this so interesting and exciting.

Most wonderfully amazing and inspiring woman

I have fallen in love with Pat Coleby. What a most wonderfully amazing and inspiring woman, I can see why you are passionate about capturing the essence of the woman. Her commitment to changing farming practices is reflective to me of (a) vision of educating a critical mass of humanity to make a difference.