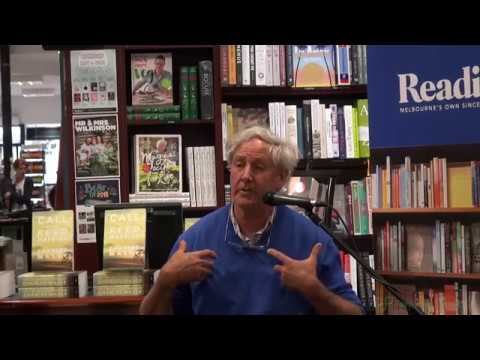 Listen as interviewer Tammi Jonas questions Charlie about the importance of a healthy and functioning soil and how it relates directly to human health. Charlie also claims that destruction of the soil by modern agriculture has lead to contemporary diseases.

Just to give you a taste of how important this healthy, functioning soil is, because it relates directly to human health. We can touch on that later. Most of the modern, contemporary diseases you can put back to destruction of the soil, etcetera, and the loss of nutrient integrity and density in the modern foods because of it. The key difference between a regenerative agriculture approach … by regenerative or ecological agriculture, or agro-ecology, I mean a landscape that renews those landscape functions. It’s actually … I hate the word ‘sustainable’. it means marking time and just holding where you were, whereas regenerative really means a going forward approach.

I guess going back to university, the book by the way came out of a late-age PhD. I was in my late 50s when I went back because I’d started to encounter through my Merino ram selling business, because we were doing different things there. The early adopters were also those that were doing some of the new ecological agriculture things. It was on visiting upwards of a couple hundred clients across every state and travelling about 70,000Ks a year to do it, not only did I see what was happening to our landscapes, but a lot of these clients that were early adopters in different genetics and fibre work were also the new adopters in agriculture. So that really intrigued me because I had already started to adopt myself, not as quickly as them. I went back to uni to ask the question what made them transform. The short answer is in 60% of their cases like Colin Seis, it was a major life-shock that cracked the carapace of their mind – marriage breakdown, bushfire, deep drought of the 80s, et cetera.

I was a slow learner. I had some of those but it took me awhile. I’ve lost the train … Ah, yes. Going back to unit after nearly 40 years, I had a lot of catching up to do, because I hadn’t followed some of the ecological work. I think one of the biggest ideas to come out in the last two or three decades, and probably in the last 100 years really, this idea has come out of a lot of the new thinking in systems. It came out of computer work, and then some of the way our physics stuff looking at chaos theory and stuff is the capacity of natural but also man-made systems, like the World Wide Web, to self-organize themselves. So when disturbed, think about a natural system, left to themselves, nature has this capacity to work to get back to a state of resilience or health. It’s called self-organization.

It was while travelling around, talking to farmers, the leading regenerative farmers, a lot of them kept saying, “Look, my job is to get out of the way of Mother Nature.” I’ve thought about that every couple of years and I’ve realised intuitively they are saying, “My role is to enable nature to get on with self-organizing its systems.” Without them necessarily understanding systems, complex systems and complex adaptive systems, which can go from your local paddock or your backyard veggie garden right up to the Earth systems, which are self-organizing, and that’s what we’re disturbing now.

That’s sort of the broad background, I think to, and the final part of the book I’m sort of trying to explain some of those issues behind those sort of things and linking … Anyway, that’s a preamble. I was going to try to give you a concrete example of this healthy soil thing that Tammi was asking just to give you one example, the difference between a self-organizing, healthy, biologically active soil, which is the basis to regenerative agriculture, one of the key bases, the difference between that and industrial soil, so to speak, is that biological activity. If you can imagine a cubic metre of soil, one of the key players other than thousands of varieties of bacteria are the root fungus called mycorrhizal fungi, your average mushrooms and paddock are some of their fruiting spores. In a healthy soil that’s fully active, the fungus, their reward for going out and hunting the nutrients is the sugars off the root-tips of the plants so there’s a partnership there, a mutual partnership. In this healthy cubic metre, there’s up to … And the fungus have these very thin, microscopic tubes that go out doing their hunting and in this healthy cubic-meter of soil, there could be up to 40 kilometres or more of those tubes working. They’re pulling in the nutrients, which the animals then eat, or which we eat.

So you then start spraying that with chemicals and industrial fertiliser, which is full of all sorts of overload. The Australian soils aren’t like European soils, they’re not loaded with phosphorus, et cetera. So the huge volumes that you find in industrial fertilisers are like a poison, that’s with our heavy metals attached and that poison, so you’re killing off the soil bugs so nothing is working to put all those 90-odd nutrients that we know exist since the Big Bang that live in our soils. Nothing is working to put most of them back into the food. That’s why … we can probably touch on glyphosate and Roundup later, but that’s’ why the correlation between the take-off of heavy industrial ag from the ’80s and ’90s, particularly with chemical agriculture and the modern diseases is parallel, that’s a key factor that we’ve co-evolved for a million years or so in the Savannahs of Africa to … We’re hard-wired to detect nutrients, and if they’re not there, and these detectors are in our gut, in our organs, our alimentary canal, they’re shrieking, they’re telling the brain that they’re still hungry. So the converse is if you’re living on junk food down at a capital MC or somewhere, your body is telling you you’re still hungry because you’re not getting the nutrients, so you’re eating too much. It’s one of the factors in obesity, which is more complex than that. A healthy, biologically alive soil is just fundamental.