Home » Experts » David Stewart » What Are The Main Hazards With Farm Tractors?

What Are The Main Hazards With Farm Tractors? 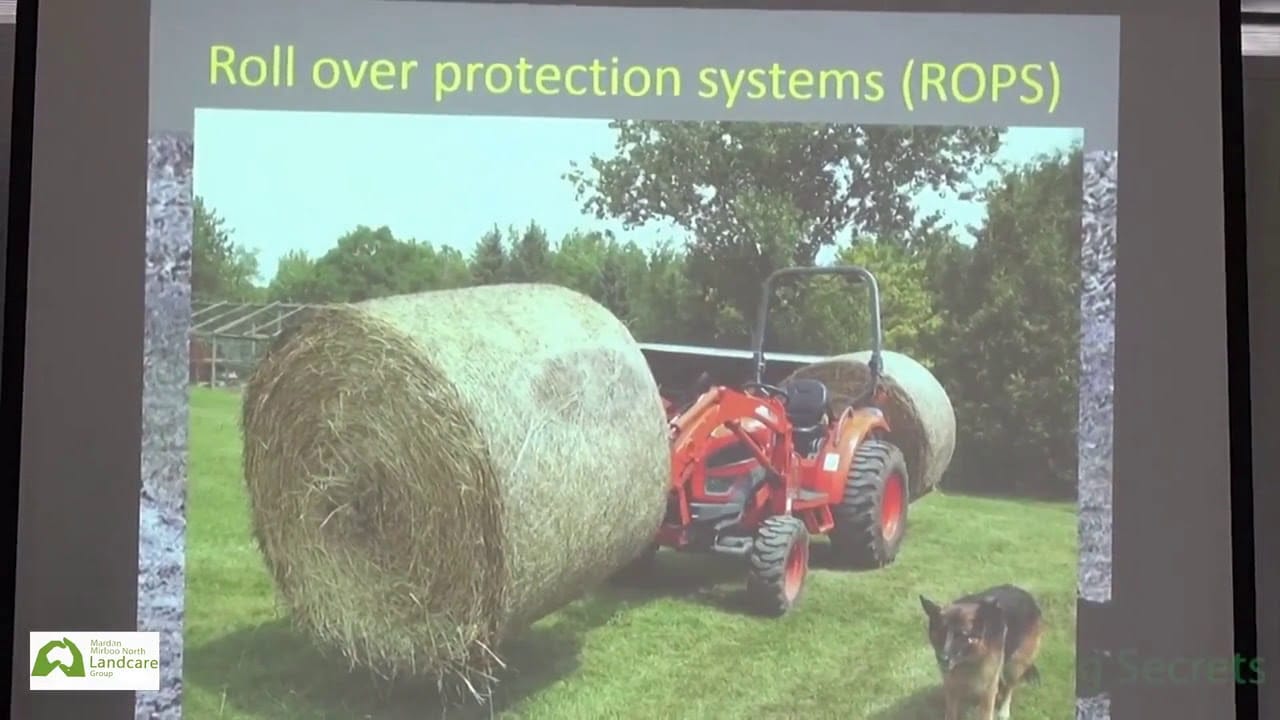 The young fellow’s got another one!
Let your kids drive them!
Very good point and he probably just dobbed Dad in ..
He’d probably do a better job!

Yeah, you can see there’s no shyness from me here. I’ve got lots of pictures of kids on tractors, which to me is just, it’s a no-go zone. All right. Rollover protection. Major cause of death with tractors is rollover protection systems are not in place, ROPS we call them, Rollover Protection Structures. When tractors roll over and people get killed underneath them, it’s usually pretty the much same story every time. Most of the tractors these days have these things we call ROPS here, they can be retrofitted, they can be four posts, they can be two posts, and the whole idea is if the tractor does roll over, at least it’s not going to squash you, we hope, so long as you stay somewhere in the zone that’s being protected by the rollover frame and you’re not going to fall outside that in the same way.

We look at a lot of modern tractors these days, they’ve got these little collapsible-type ROPS frames here as well, which are designed for going underneath trees, or that type of thing or in orchards. What I am concerned about with tractors, a lot of these newer tractors, particularly these imported ones, compared to the old Masseys and the John Deeres, they’re actually pretty light, okay, and often they’ve got a hydraulics which are sort of beyond the ballast capacity of the tractor, so I’m quite concerned about, and I’ll go to the next photo here. When we start to put a fair little load on them and we start to lift the centre of gravity up on these machines, they become very unstable very quickly. And particularly in hill country.

So we’ve got to really think about what we’re doing when we carting things like hay around on tractors where you’ve got this [inaudible 00:07:55]. If you’re driving that tractor with probably 350 kilos in the front and on the back, that thing’s just going to be rocking backwards and forwards as you go across the paddock. And so we need to start thinking a little bit about well, this is all very well, you’ve got a more efficient system of cutting hay out there because you can do two bales at the one time, but is it actually a really smart thing to do, given that you’re actually going across the paddock, and the level of instability.

One step in here, once we start to lift bales up, what becomes the problem?
Centre of gravity
Centre of gravity goes up. As our centre of gravity goes up, we lose stability. A lot of the earlier deaths with round bales is with the early, no spikes in the bases, just a fork that just went underneath the bale to lift it up, was the bales would come up and they’d roll off the back of the front end loader come down across the canopy, hit the person sitting on the tractor and either break their neck or kill them, okay? Now for the most part, most tractors have these spikes which go into them, and that’s a good thing too. Also there’s some of these level-load-type things which actually keeps the load level rather than going up too high.

So what’s going on with rollovers? I’ve talked a bit so far just about centre of gravity, but we also have to look at what can go wrong with a tractor when it comes to flipping over for other reasons. It’s not all just about steep hills, this thing can happen on flat country as well. What we’ve got here is a tractor that’s basically pulling itself over, and we’ve got this thing here at a critical point of no return, which you call a moment of inertia. About three-quarters of a second to get to there, about one and a half seconds to go the whole way.

SEE ALL POSTS
PrevPrevious PostWhat Do You Think Would Be The Main Things That Are Causing Farm Deaths?
Next PostA Cautionary Tale When a Community Lacks Diversified IndustriesNext

The Australian countryside boasts an incredible diversity of natural landscapes and is home to a thriving agricultural industry worth over A$66 billion. However, poor addressing

Regen Ray Reflects: the Future of Agriculture and Food Security