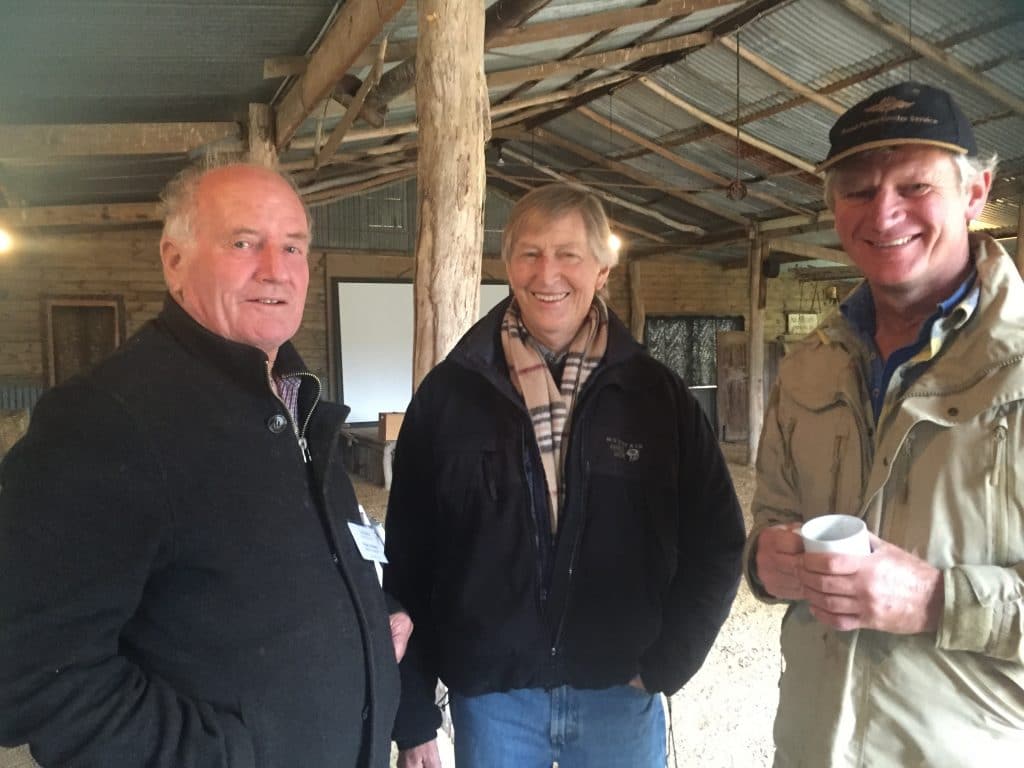 As written in the last news, we did go to Mulloon Creek Institute on 19th June and we did do some filming despite the event being cancelled due to torrential rains. It was exciting to visit as the water was literally pounding over the wall of Peter’s (Andrews) Weir but the water behind was as still as an inland lake. Tony Coote pointed out to us how clear the water was; it certainly wasn’t taking his topsoil away and this is what Peter Andrews work achieves. We look forward to sharing this with you. 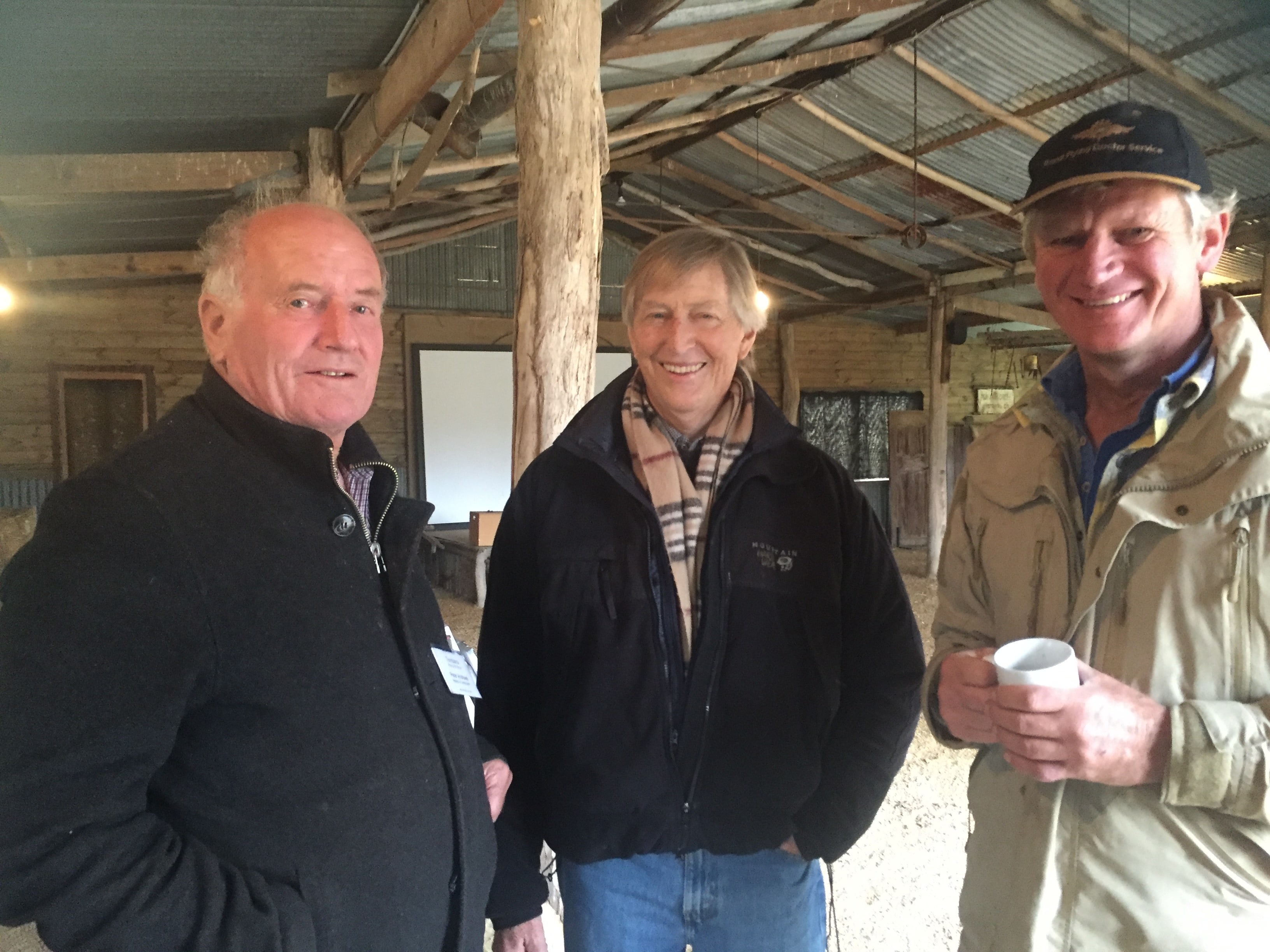 The Mulloon Institute is of note as it is only one of five sites around the world that have been selected by the UN Sustainable Development Solution Network as a Demonstration Project due to what it is achieving with the environment, with agriculture and the community. With the support of State and Federal Government and the partnership of 20 landowners, it is managing 23,000 Ha with 43 Km of creek front. Scientific measures are in place and the vision is huge and brilliant.

The day before visiting Mulloon, we had visited Farming Secrets member, Phil Shoemark (L with Peter) at his farm in Braidwood. We organised to film Peter Andrews, along with Martin Royds, to demonstrate how Peter 1st works on a farm to plan landscape restoration and rehydration. It was interesting to see the approach – with a map –before touring the farm. Unfortunately time was against us as we had spent an unplanned morning at Martin’s, along with Peter, and former Governor General Michael Jeffery and others basically discussing how we can all work together to promote and restore our land and our soils with natural farming.

This was a natural progression from the night before where Farming Secrets were privileged to attend, along with many other friends and supporters of natural farming, the launch of “Tombarra”, the brainchild of farmer, Martin Royds where, as Martin says, we can make the change happen! It is envisaged that “Tombarra” become a meeting place for all likeminded people for exchange of ideas and training. The launch night was one of celebration commencing with the official opening speeches which included aboriginal elder, Shane Mortimer, Michael Jeffery, Soils for Life chairman, (L) Gary Nairn, Chair of the Mulloon Creek Institute Below with Martin Royds ) which will use the centre for running their programs.

Then the night began with music and dancing, along with good food and wine. Martin led with a song he had written and then came Seeker, Keith Potger (L)who sang appropriately named, “There’s a New World Somewhere” and we all joined in with much merriment.

In all we spent 3 days in the company with leading thinkers and practitioners of future farming including Michael and Louisa Kiely, Carbon Farmers of Australia and too many more to mention and finished up in Bungendore in deep discussion with Peter who is becoming very keen for action!

An Invitation For You To Join Us!

On Thursday 28th July, we will be filming at Nutrisoil Open Day, always a great catch up with our network and to share with farmers seeking change. This year Walter Jehne, Healthy Soils Australia, is one of 3 presenters.

If you are unable to join us you can check out an earlier event “Living Soils” where presenters Dr Christine Jones, Nicole Masters and Graeme Hand take a closer look at soil and soil functioning.

Farming Secrets see this as an excellent starting point for all of us to re-examine our goals for our farm planning. Where are you on the path to biological farming? We believe that biological farming is the only form of sustainable farming for the future

This 2 Film set is a brainstorm on Biological farming for: Awareness, Knowledge, Understanding, Motivation, Action to Outcome

Visit the Farming Secrets Store to purchase today. It is excellent value.

This is a clip from “Walk the Talk” with Walter Jehne: Fungi Grows Healthy Soils filming available for Farming Secrets Members.

Soil Health Advocate & Business Partner @ Farming Secrets ‘Regen Ray’ is a soil lover and partnered with Farming Secrets to take their business into the next generation of online learning, launching the Soil Learning Center during the pandemic. He now works with mentors from around the world to create educational programs all about soil. ‘Regen Ray’ has been teaching people about soils for years through his online classrooms, webinars and recently launched his podcast, Secrets of the Soil. On this show, he interviews experts in their field and talks about important topics all about the soil. ‘Regen Ray’ wears many hats from business to marketing to operations and even crypto. His belief that everything good in life starts with healthy soil has allowed him to dig deeper and help create inspiring conversations all over the world.
SEE ALL POSTS
PrevPrevious PostFarming the Sea While Helping Clean Up the Oceans
Next PostWhat Is the New NPK?Next