Last week Hugo and I attended a nearby community meeting concerning

concern regarding how his crop was going to affect them.

harmful than Roundup which was perfectly safe and did not harm

the environment. He added that the bees loved visiting his canola too.

the GM crop – he had read the OGTR all 212 pages of it, and in particular pointed out

that GM canola was safe to human health. He also referred

of benefit to the environment. Lastly to add his final blow he left copies

choose GM or nonGM because it would be labelled.

because there were no cases where GM canola had escaped!

Hugo and I were shaking our heads by this time. I have to say that

corporate strategy to make the farmers pawns in their hands. Also

to get rid of weeds. I also asked if he was aware that the French farmers

had discovered that Roundup was harmful to the environment as it

was escaping into the nearby waterways. Due to this fact Monsanto are

forbidden by law to advertise that it is non residual. His response

was that the Roundup used here was different!

The evening concluded with 2 votes: 1. To recommend that the 2

neighbouring shires be GM Free and 2. That any person or business

affected by the growing of GM be compensated. both votes passed

a local meeting but was so out of touch with his community. He seemed to

have no sense of anything being awry. Does he realise that believing that

look after the chickens?!

What do you think? 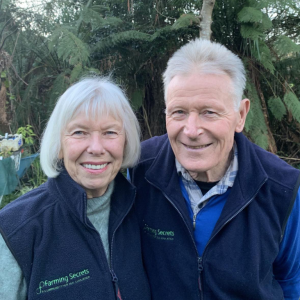 Hugo and Helen are passionate to support farmers to farm without chemicals. They started Farming Secrets with the vision to film successful farmers and experts sharing their knowledge on how to grow a healthy soil with less stress, less inputs but with more profits. The result? Happy farmers producing nutrient rich food for all and building a viable farm for future generations.
SEE ALL POSTS
PrevPrevious PostMike Fix – Pasture Rehabilitator – Part 3
Next PostHow to make a compost tea recipe using vermicastNext