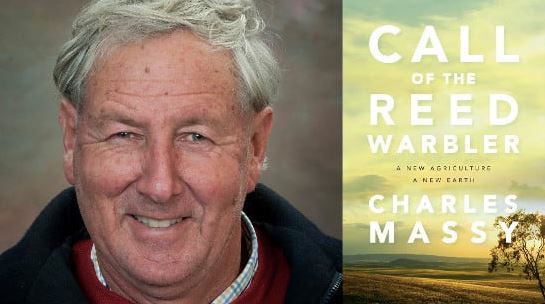 Dr Charles Massy gained a BSc (Zoology, Human Ecology) at ANU (1976), before going farming and developing a prominent Merino sheep stud business. His concern about land degradation and humanity’s sustainability challenge led to him completing a PhD in Human Ecology (ANU) in 2012.He has chaired and served as a Director on a number of national and international review panels and boards of business, research organisations and statutory wool bodies, involving garment manufacture, wool marketing, R&D, molecular genetics and genomics. Charles has engaged in freelance journalism since 1977, widely publishing across a range of subjects including mountaineering, history, ecology and the environment, plus fiction and poetry. His first two books told the history of the Australian Merino and his third book, Breaking the Sheep’s Back (2011), recounted the political destruction of the Australian wool industry. The latter was short listed in 2012 for the Prime Minister’s Literary Award for Australian History and for the Ashurst Business Literature Prize. He also contributed a chapter to the ground-breaking anthology Fair Food (2015). His new book, Call of the Reed Warbler: A New Agriculture – A New Earth (UQP Sept. 2017) concerns the emergence of a regenerative agriculture in Australia and its positive implications for both addressing humanity’s emerging Anthropocene crisis and also for human health (physical and mental). Charles still manages the family’s grazing property in NSW while teaching at universities and consulting widely in the fields of Merino breeding, landscape design, and transformative change in agriculture.

Walter Jehne – Internationally recognized climate scientist, soil microbiologist and innovation strategist, founder of Healthy Soils Australia. Walter has immense field and research experience in forests, grasslands, agriculture and soils at national (CSIRO) and international (UN) level. He has also worked more broadly beyond science, at Federal Government level, leading transformation in industry. This diversity of experience has given Walter a unique and exceptional capacity to devise solutions – he makes challenges turn into opportunities. Walter has a remarkable ability to explain complex science and economic paths forward in easy to understand ways, and we’re very keen to hear him discuss how to restore key natural landscape processes and through that our soil, water, food security.

Dr Barbara Cook is a Senior Lecturer at the University of Western Australia, and the Director of the Centre of Excellence in Natural Resource Management which is based in Albany. Her research interests are varied, and include the management of the health of our natural resources such as aquatic systems and soils, the impact of recreation on the environment, climate change, and the ecology and distribution of aquatic invertebrates. She is currently leading a citizen science project which is aimed at testing the effectiveness of different biofertilisers for improving soil health.

Ronnie Duncan – Co-founder of Meerkats, the Creative Business Solutions company. Ronnie’s working life started as a London-based advertising guy trying to persuade people to eat more Cadbury’s chocolate, drink more Bass Brewers beer, and choose Kraft General Food’s freeze-dried instant coffee granules as real coffee. That was in the late 1980s. In 2001 he evolved, moving to Western Australia he co-founded a new kind of Creative Business Solutions company called Meerkats. Meerkats’ approach is to start with the true purpose that drives every organisation they work with – the purpose that creates genuine value for people – to know what you’re serving rather than selling. Some of the local companies they’ve worked with are Brownes dairy – where the mums working there felt empowered to take their yoghurt brands back to nature, as well as launch a sugar-free flavoured milk for kids; Harvey Beef – where the old-school butchers still train their boners today; and Southern Forests – where a collaborative brand has been established to encourage the region as a sustainable culinary tourism destination. Ronnie’s also worked with the Worldwide Fund for Nature (UK), developing a program of Sustainability Education for business schools. So accelerating climate action is a passion, and since the food & agricultural sector is the No.1 contributor to global greenhouse gas emissions, he has become focused on the transition from industrial farming to agro-ecology. He believes that this can only become mainstream though, if there is a broad shift in consumer sentiment towards fair food.

Kelvin Flugge – Kelly as he is more commonly known is a Noongar man from the SW of WA with a 30 history working in Aboriginal Affairs at the Private sector, Commonwealth and WA State Govt level. Manager Aboriginal Economic Development South West WA for the Dept. Primary Industry & Regional Development (DPIRD), he works with Noongar land managers building their farm business capability across mainstream agrifood business with a passion for business diversity into honey, bush foods and beverage production.