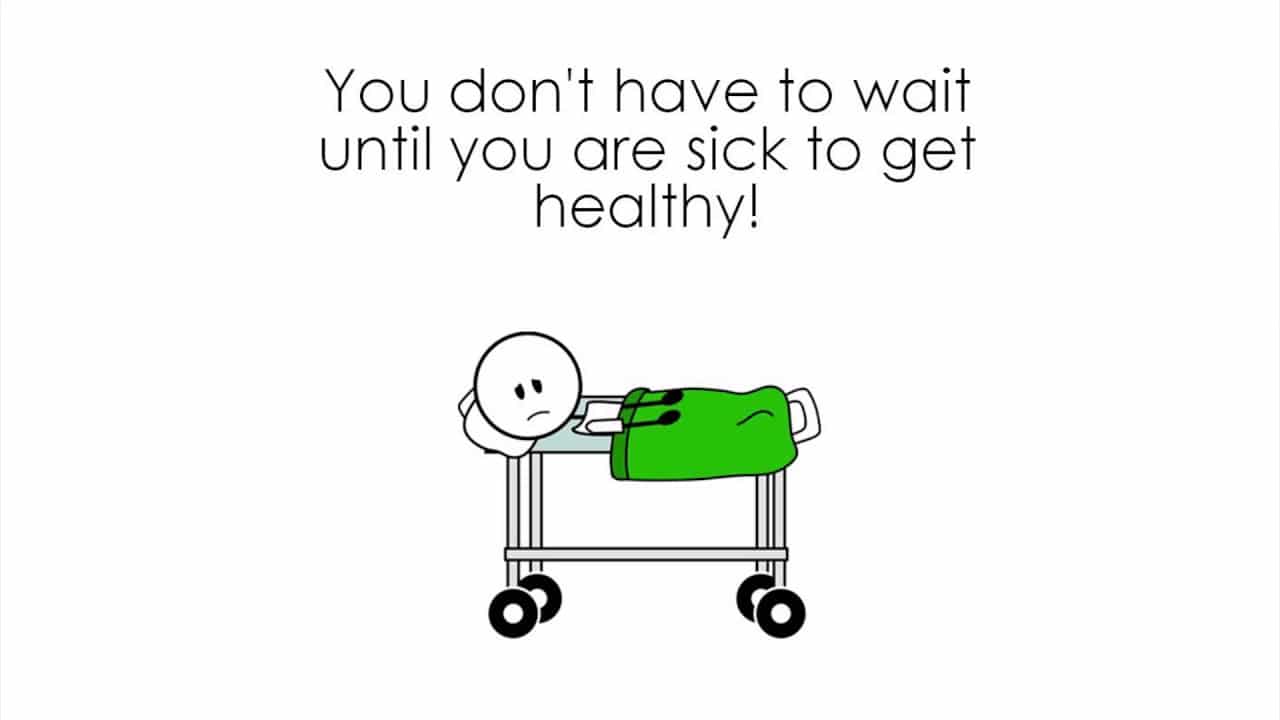 Now, many of us in the room today will experience a handful of these symptoms on a regular basis. But how often do we actually stop to think about where these symptoms are coming from? So often we just reach for the medicine cabinet. There is a pill for every ill. So if we have a headache, we get the paracetamol. If we’re depressed, antidepressant. If we’re constipated, laxative. If we have thrush, there’s Canesten. Acid reflux, there’s proton pump inhibitors. And so forth, and so forth. And those supplements, they do a pretty good job of getting rid of the symptoms, but they don’t actually do anything to address the underlying cause. So we’re kind of masking, mopping up the symptoms without actually addressing what is causing these symptoms in the first place.

If we look at it another way, say you walk into your kitchen and you see this. The tap is on, the sink is clogged, and there’s water gushing everywhere. What’s the first thing that you do in this scenario? Do you get a mop and start mopping? Or do you turn off the tap? In this scenario it’s pretty obvious, isn’t it? You turn off the tap, because that’s the source of the problem. If you were to get a mop and start mopping, you’d be mopping and mopping for hours and hours, and days and days, and weeks and weeks, and months and months, then your floor would rot and your house would collapse. And that’s actually what often happens to our health; we’re constantly mopping, we’re constantly addressing the symptoms and not the underlying cause.

So the symptoms I showed on the previous slide can become much more significant health issues, and they’re called 21st century diseases because they really weren’t around all that much 100, 150, 200 years ago. And many actually not even around that much 50 years ago. So we have allergies and Alzheimer’s, there are actually 1,500 people in Australia diagnosed with dementia every week, which is really quite concerning. We also have autism, the rates in autism in some countries are as high as 1 in 80 children, which is really quite mind boggling. Autoimmune diseases, there was actually a report that came out last week that showed that in the US autoimmune diseases now affect one in six individuals, so autoimmune diseases, there are about 80 different autoimmune diseases. Autoimmune diseases that we commonly know are things like rheumatoid arthritis, multiple sclerosis, Hashimoto’s. Now one in six individuals in America are affected by that and Australia’s usually not really that far behind.

We have depression and diabetes, heart disease is still Australia’s number one killer. Obesity affects one in five. Parkinson’s of course is on the rise. So, so often we don’t actually start to do anything about our health until we have a diagnosis, until we actually experience a health event. But the most important message that I want to get across today is that you don’t actually have to wait until you’re sick to get healthy.

People often say, “Well if I want to improve my health, where do I start?” Well it was actually Hippocrates that said way back in 460 to 370 BC, that all disease begins in the gut. So I think that’s a pretty good place to start. And a lot of research is showing that there’s a very strong connection between the state of our gut and the development of many of those 21st century diseases I showed. And a lot of researchers believe that supporting gut health, is actually going to be one of the most important goals of medicine in the 21st century, so it’s pretty exciting.

SEE ALL POSTS
PrevPrevious PostHow Did Marieke Get Involved In Health?
Next PostHow Can We Actually Change The Gut?Next

The good bacteria also play a very important role in detoxification. They’re like the garbage trucks of the gut. They go through, pick up all the rubbish, and then shunt it out through the faeces.