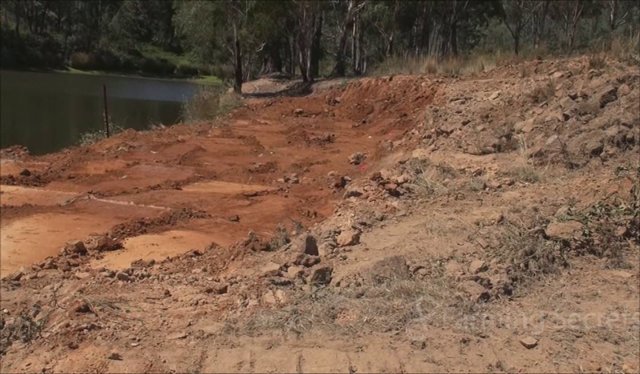 Hugo: David, would you like to explain what you’re doing here?

David: So we’ve chosen this site to put a bench in you can say. One it gives us the material to repair the dam wall. But the other function that it can have is it creates a micro climate which is it’s a different climate to the local climate. We’ve got a couple of factories coming in. We’ve got thermal mass in the water. So when the air temperature drops, the thermal mass is still, is regulating or moderating the temperature fluctuations. We’ve got a mirroring effect coming off the water and that will become more prominent in the middle of winter because the sun will be lower and have a lot of refraction coming off there.

So I’m sort of guessing in some ways that we’re going to have five degrees, five to 10 degrees difference in this spot than out there. So that’s, certainly not for commercial things, but say for the homes sort of scale of things, you can grow very cold sensitive plants here.

Hugo: At least on shoulders

David: That could be a great spot for a house, yeah. In summer, you’ve got — the wind coming off the water which helps cool the air that blows through your house. There are many, many benefits and functions that you could get from this excavation which is initially put in to repair the dam but then there’s other potentials or functions that we can make out of it. Much the same as we’ve done down the bottom as well. We’re putting another terrace where we sourced of material to repair the dam walls and yeah, we’ll set that up as a hardening off area and other sort of machinery shed etc.

This clip is a sneak peek of our “Walk the Talk” April 2014 filming from the Earthworks to Create a Fully Functional Farmland with David Spicer.
‘Walk the Talk’ filming is one of the benefits of becoming a Farming Secrets member – see more benefits here: http://circle.farmingsecrets.com/member-registration/

PrevPreviousPutting an insurance policy on the dam
Next“Say goodbye to fertiliser costs – worms are the answer!”Next 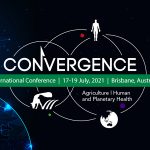 How Farmers Can Recover From Wildfires

Still addicted to Chemical Farming in 2020? You need Regen Rehab

Training in Regenerative Agriculture: Change is in the wind